I’m excited to announce the publication of Blaster: Volume 4, which contains my complete mini-game, Deathship One! 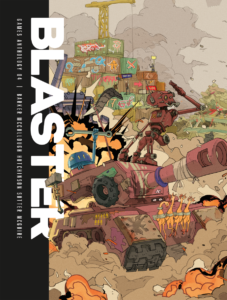 Deathship One is a solo or co-operative game in which the player controls a squad of soldiers that have been pulled out of time and dumped into an alien deathtrap. The whole game consists of 5 rooms that the soldiers have to try and fight their way through… and they aren’t really expected to survive.

The game is also an experiment in wargaming  ‘minimalism’.  All you really need to play is a set of blocks or other walls, a few tokens, and minis for your squad and a few different types of aliens.

If that is not enough to convince you to pick up the new issue of Blaster – the volume also includes a complete tank versus tank game by Joey McGuire! Not too mention cool content from Sean Sutter, Ash Barker, and Mike Hutchinson!

The new volume is currently available on DriveThruRPG as both a PDF and Print-on-Demand!